Following a debut season with career highs in goals, assists, and points, Domi tops our list. 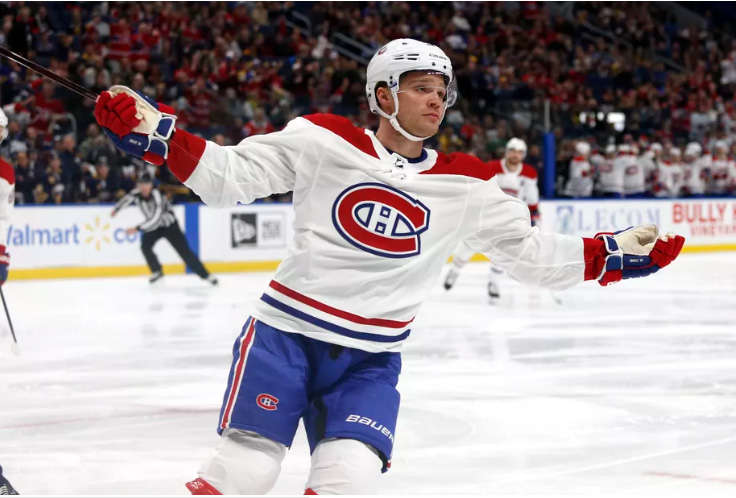 Fans had their reservations about the Montreal Canadiens acquiring Max Domi. Now, the 24-year old has turned into a high quality point-producer, thriving in a hockey market that’s he longed to play in.

It feels like eons ago that Domi got himself suspended for punching Florida Panthers defenceman Aaron Ekblad during the 2018 pre-season. It furthered fans’ skepticism of the young forward their team acquired in exchange for Alex Galchenyuk, who never truly found his footing as a centre in Montreal and needed the change of scenery as much as the player he was being traded for.

Prior to the 2018-19 campaign, Domi had yet to prove he was a reliable and consistent top-six forward in the National Hockey League. If you think Galchenyuk’s goal totals may have underwhelmed in his final three seasons, they were still better than Domi’s last three entering his first full year with the bleu-blanc-rouge. The newcomer had to win over fans once the regular season began.

Fortunately for him, it didn’t take long to endear himself. He earned three assists in his first two games, and it only took him six to score his first as a Hab. Through most of his plays, he flashed speed, effort, and toughness.

With those traits, combined with more attention to shooting — at the behest of “Uncle” Mats Sundin — Domi finished the season second on the team in goals (28) and as the team’s leader in assists (44) and points (72) in a career year. All that despite going 17 games without a goal midway through the season (he still picked up nine helpers in that span).

He was an integral part of a Canadiens team that missed the playoffs by a hair, but it’s clear — as he’s made known to Habs fans — he has bigger priorities.

“I appreciate everyone saying that we had a good year, exceeding expectations all that good stuff,” Domi said at the season-ending postmortem. ”We’re not satisfied, we’re not happy, and this isn’t going to happen again.”

This off-season has seen him tell anyone and everyone the benefits of playing in Montreal. Not only has he turned into a worthwhile acquisition, but he’s somebody the team should look at when it comes to selling free agents on playing in a city that’s increasingly difficult to play in when you lose. Yet when you win, you’re treated as a god. Domi understands this.

“If I was talking to a free agent… If you truly love hockey, you would not want to be anywhere but Montreal”

– @max_domi stopped by #TimandSid and discussed how special it is to play in Montreal. #NHL | #Canadiens pic.twitter.com/SRQTYSg8SK

For voters, there were only two options for Max Domi: first or second. Some placed Jesperi Kotkaniemi or Jonathan Drouin atop their list, but just under half of all panellists preferred the former Coyote in the number-one position.

Scott: Domi was far and away the best forward Montreal had last year, and there is every chance he continues to build on that going forward. His playmaking skills came as advertised, but we saw a rebirth in his goal-scoring ability, and that bodes well going forward.

I ranked him behind Kotkaniemi due mainly to the fact that even in a rookie season where he struggled at times, the young Finn is clearly going to be something very special. Not that Domi isn’t very good right now, but if it came down to the two of them, I’m sticking with the young center who got Selke talk from the hockey community and hasn’t yet hit his full stride.

Jared: A year ago, I didn’t think Domi had that kind of season in him. I don’t think he’ll necessarily score 28 goals every season, but he showed me enough that he can play centre. Even if he does move to the wing given the prospect depth of the organization, I see a player who thrives under the Montreal pressure, and will continue to.

I don’t think he’ll necessarily always be the best player of the players in this ranking, but as of right now, I don’t think anyone has a better claim to the top spot.

Domi was second-best in the 2018 edition of our list, trailing behind Drouin. In what will be his final year in our T25U25, Domi can say he went out on top.

Domi’s playmaking ability can’t be understated. When he wasn’t scoring goals, he was at his best working to set them up. Even if the following highlight wasn’t a primary assist, it’s still one of the nicest plays of the past season.

Keeping with the theme of even strength, Domi minutes on the ice at full strength saw more chances near the net. The team can at least count on him as an offensive weapon when he’s called upon.

His speed makes him one of the quicker players at any given moment, making it hard for opposing players to keep up with him.

Domi did a ton of great things for the Habs last year. He will be looked at to repeat, or at least come close, to his 2017-18 production. If he doesn’t, there will be some concerns about his consistency.

He also wasn’t brought in to be a defensive-minded forward, but it is his most glaring weakness. Defensively, whether through special teams or at full strength, he’s not the guy you want on if you’re trying to preserve a lead. Teams got quite a few quality shots on net when he was on the ice defending last season.

His faceoffs could use some work as well if he’s going to continue playing the centre position. He finished the year with the second-most won among Canadiens players as he was tasked with plenty of the starting battles, but still finished with a rate below 50 percent.

Kotkaniemi enters his second NHL season in the second spot.

Domi’s increased shooting habits are a positive step in the right direction, and could see him hold steady as a perennial 20- to 25-goal forward. His playmaking abilities should keep him a top point-getter on the team, and he’ll be counted on to help players score goals.

Whether or not he slots as a centre or a winger, he should be deployed in the Canadiens’ top-six. It’s only a matter of finding the perfect linemates for him, now that Andrew Shaw, who worked very well with him, is back in Chicago.

The forward has shown he’s passionate about the game, drawing from his father’s influence. If he keeps it up, no one will have any reason to doubt him anymore.