One generation later, another Domi is poised to be the villain in a Senators rivalry with a nearby opponent.

Is it possible Ottawa fans will grow to hate Max as much as they did Tie?

Is that Max’ ultimate goal?

“Hate is a pretty strong word,” said the 23-year old Montreal Canadiens winger, grinning when his legendary father – and former Toronto Maple Leafs tough guy – was mentioned in conversation after Thursday morning’s skate. “Every fan base is passionate, right? He wore his heart on his sleeve and he represented his team. I’m sure Ottawa represented their team by not liking him. That’s the beauty of sports. It’s all fun and games, and at the end of the day all we focus on is having fun and trying to get the two points.”

Heading into Thursday night, Max Domi had played just two games against the Senators as a member of the Habs. In those two games he had three goals and four points. At Bell Centre on Tuesday, he buried the Senators with two goals and an assist, while also showing flashes of his old man’s style by jumping rookie Drake Batherson and taunting veteran Zack Smith.

“Obviously you’ve seen the feisty side of his game, where he’s intense and he plays the game hard,” said Habs captain Shea Weber, when asked about the similarities between Max and Tie – who Weber played against. “He’s been really good for us so far this year in obviously the aspect of getting points, but he’s played the game hard as well and done the right things out there.” 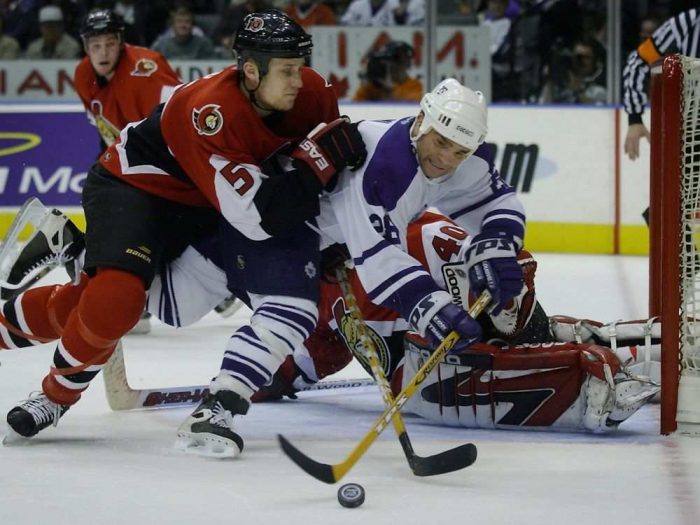 According to dropyourgloves.com, Tie Domi had 339 fights in 15 seasons. Against Senators, he had a record of 9-0-4 (with three others marked “unfair”) until his last season, when he lost a memorable bout on Hockey Night in Canada against Brian McGrattan in October, and then another to Chris Neil in January.

The most stinging blow the eldest Domi delivered to the Senators occurred in the 2002 playoffs. Ottawa was up 3-2 in the series and 2-0 in Game 6 when Domi went tumbling into the boards after being hit by Ricard Persson from behind. (Domi later admitted he threw himself face first into the ledge hoping to draw blood and ensure a power play). The Leafs scored twice during the five-minute major and went on to take the game, and Game 7.

“If Tie Domi had better balance, we would have won the series,” Daniel Alfredsson would say later.

Max said his dad always looked forward to playing against the Senators.

“He loved it,” said Max. “These were his favourite games. When I would come in here with Arizona, he’d always say ‘oh I used to love playing against Ottawa, Montreal.. all those Canadian rivalries, the original six’. But when Ottawa and Montreal go head to head, it seems pretty cool.”