A Q&A with the son of former Toronto Maple Leafs tough guy as he tries on his new No. 13 Habs jersey for the first time. 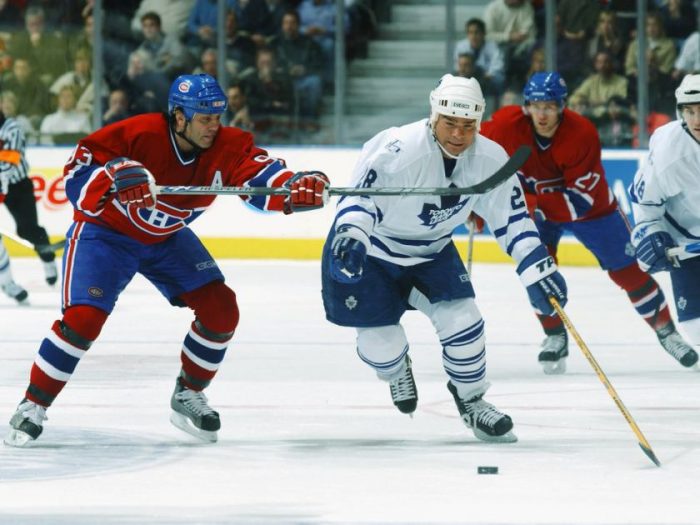 Tie Domi of the Toronto Maple Leafs chases after lose puck while being checked by the Canadiens’ Doug Gilmour during NHL game at the Air Canada Centre on Feb. 8, 2003. DAVE SANDFORD / GETTY IMAGES/NHLI

Max Domi couldn’t wipe the smile off his face Saturday afternoon when he met with the media and tried on his new Canadiens No. 13 jersey in the team’s Brossard locker room.

“I’m super excited to be here,” said the 5-foot-10, 195-pound left-winger who was acquired from the Arizona Coyotes earlier this month in exchange for Alex Galchenyuk. “I haven’t been able to stop smiling the whole time.”

Domi was making a quick, 24-hour visit to Montreal to drop in on the Canadiens’ evaluation camp and meet with general manager Marc Bergevin, coach Claude Julien and other members of the team’s staff while also looking for a new place to live.

“I spoke with everyone, pretty much,” said the 23-year-old Domi, who is coming off a disappointing season in which he scored only nine goals — including four empty-netters — and added 36 assists in 82 games. “I think it’s a summer where everyone’s trying to get better and everyone’s trying to make a bounce-back year. To be part of that is awesome and we’re all looking forward to that.”

Here’s some more of what Domi had to say when he spoke with the media Saturday:

On his earliest hockey memory:

“I took a hockey stick everywhere with me when I was a kid. Most kids would sleep with like teddy bears or bunnies or whatever. I slept with a hockey stick. I don’t know how comfortable that would have been back in the day when they were wooden sticks, too. I’m sure it was like a senior TPS stick or something like that … I don’t know. Anyways, I took a stick everywhere I went and as soon as someone would walk in my front door in Mississauga, Ont., … it doesn’t matter who they were, how tall they were, how old they were, what gender they were, I was like: ‘You’re coming down and I’m shooting some tennis balls on you in the basement before you do anything. You’re not allowed to go say hi to anyone, let’s go play mini-sticks.’ So I was pretty keen on opening that door. Anyways, that’s kind of the memories that stick out most is just always wanting to play hockey every day that I was a kid. Obviously, school was a big part of that, but for me it was always I can’t wait for practice to end and I can’t wait for the game on Friday, Saturday, waking up at 6 in the morning and ultimately getting to play in the NHL one day. And now I’m living that, so it’s pretty surreal.”

On the big media scrum Saturday, something he didn’t see in Arizona:

“Arizona was good. It’s a great place to play … it’s a hidden gem. You can say whatever you want about the fan base there and the fact that we don’t have these kind of media scrums there. But at the end of the day, there’s a lot of good people in the (Coyotes) organization from top to bottom. Coaching staff, management, training staff and the fans, marketing people and all those people. They’re awesome. They treat you like first class and just fun to be around. It’s unfortunate that the last few years have gone the way that they went. But I’m excited that they brought me over here in Montreal and I wish that whole franchise nothing but the best. In a perfect world, I’d like to see us play against those guys in the Stanley Cup final. I wish them nothing but the best. I’m excited to take the right foot forward here and I’m a Montreal Canadien now, so that’s all behind me.”

On his meeting with Julien on Saturday:

“We didn’t really get into the details. Just talked about what I was doing here, catching up on summer plans and training stuff and basically stuff in life. I talked to him a little bit on the phone, but that’s the first time I met him in person. So pretty cool to see him and definitely excited to get to work with him.”

On the current makeup of the Canadiens:

“The general manager’s been a part of a some Stanley Cup teams and stuff. You’ve got a coach that’s won a Stanley Cup. You got older guys like Shea Weber, whose been a guy that I’ve been looking up to before I even played in the NHL. You got the best goalie in the NHL (Carey Price). You got guys like Brendan Gallagher, you got Shawsy (Andrew Shaw), I mean the list really goes on with all the young kids coming up. Just to be a part of that and to fit in is pretty special. So huge honour. I’m really, really excited. I’m not really sure what kind of role I’ll have, but whatever that is I’m going to try and do it to the best of my ability.”

On growing up as the son of former NHL tough-guy Tie Domi:

“I definitely can’t change my last name, that’s for sure. But you know what, it’s part of who I am and there’s a lot of positives that come with that. I’ve got a lot of childhood experiences and memories that you can’t make up. Getting to go to the Air Canada Centre, getting to call a guy like Mats Sundin someone like your uncle pretty much. He still sends me little workouts to do throughout the summer and even if I don’t shoot the puck — I didn’t shoot the puck that well last year — he’s the first guy to text me. So just a relationship like that and me being able to see how my dad handled stuff like this. How he would kind of endure everything, all the ups and downs of an 82-game season. Sometimes, you’re not playing great … how do you get through that? It’s the work ethic and really just doing whatever it takes to win. You know what, I focus on the positives of that and I don’t know if I’d be where I am today without the help of him. A lot of learning’s been going on between us. He’s been out of the NHL for I don’t know how many years (Tie retired following the 2005-06 season). I’ve been in the NHL for three and he still sends me texts after every game, kind of the same sort of thing as he did when I was in minor hockey. He’s not really worried about the goals and the assists and the points. He’s more worried about the discipline and the hard work and just being a good teammate and winning. That’s all it’s about and he’s made that very clear since I was a kid. He’s really ingrained that, so I take a lot of pride in listening to him.”

On the possibility of getting his father — who spent most of his career with the Toronto Maple Leafs — to wear a Canadiens jersey:

“It’s funny, we were just doing this thing for Twitter and someone asked that: ‘Are we going to see your dad in a Habs jersey?’ I answered it … as if you know what, I’m going to try and get him to at least pose for a picture with one in the first game here in Montreal. You know what, if you would have told anyone in their right mind 5-10 years ago that Tie Domi was going to be a Montreal Canadiens fan they would have looked at you and laughed and said that’s crazy. I’m his son and I’m playing for one of the most historic franchises in all of sports and he’s the biggest Habs fan in the world now. So it’s a reality. I’m super excited to be a part of it and he’s just as pumped.”